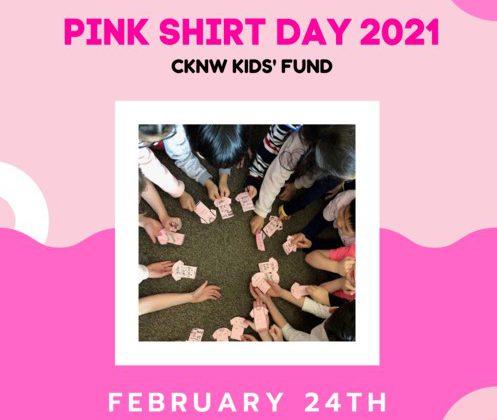 With Pink Shirt Day nearly upon us, a pair of local residents are sharing their stories about growing up different.

Anti-Bullying Awareness Day, or Pink Shirt Day takes place Wednesday, and this year the day is focusing on working together and treating others with dignity and respect.

For Francheska Onasanya, who’s father is Nigerian, her experience as a black person living in a predominantly white community has opened her eyes to how racially divided society is.

Even growing up, she says she felt segregated simply because of her appearance.

“There was never a pencil crayon that was my skin colour and it was always announced by the class not to call them ‘skin-coloured’ pencils, because I was a different skin-tone,” Onasanya said. “Whenever I wore my hair down, I kind of felt like an animal because people would walk up to me and touch it. I’ve even had teachers say they wanted my skin tone.”

From another perspective, Alex Fear is a transgender student currently attending Queen’s University.

As someone who’s faced bullying through most of their life, they say school was an extremely volatile environment.

“Some folks would yell things at me in the hallway, or made sure I couldn’t access certain spaces in the school, target me outside of school, or even target me online,” Fear said. “That was a really challenging experience to go through, especially as a young person who was new to their identity and who they were.”

With Pink Shirt Day, Fear says it’s vital that we acknowledge the importance of helping one another and advocate for those who need it.

They add that no one is perfect, and we all have room to learn and grow as individuals and as a society.

“We should be challenging how we interact with others and challenge how we view and define what bullying may be,” they said. “I think it’s really easy for everyone to feel like they’ve never been a bully or they’ve never done harm to other people – generally, that is not the case. We’ve all hurt people, whether intentionally or inadvertently in our lives.”

Meanwhile, Onasanya says the day is an opportunity for her and others like her to stand up for themselves, be proud of who they are, and reflect on what ‘anti-bullying’ means to them personally.

She says she likes to take the advice of her grandmother.

“She always said that I had a voice,” she said. “I would definitely give that advice to any person dealing with the same circumstances. You have a voice, no matter what anyone else ever tells you. Anything you say can change at least one person’s perspective, if not more, and eventually that will change the world.”

For more on Pink Shirt Day, or to show your support through donation, you can head here.