Catholic teachers’ union could be next: OECTA president 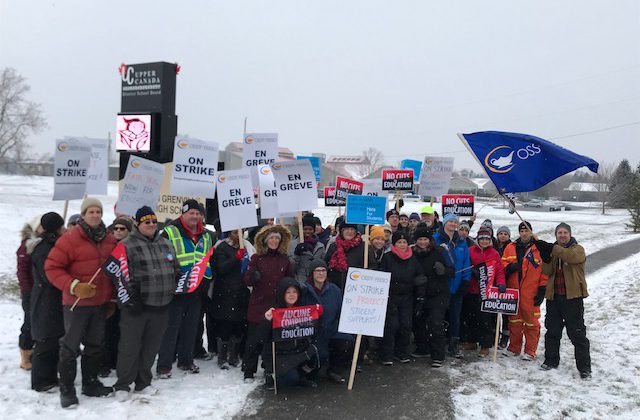 High school teachers and education workers across the province hit the picket line this morning. The Ontario Secondary School Teachers’ Federation (OSSTF) began the one-day strike at midnight. Classes for students in grades nine to 12 were cancelled at South Grenville District High School.

The job action follows on the heels of a close call between the province and CUPE (Canadian Union of Public Employees) at the beginning of October. The union, which represents 55,000 education workers, planned on walking off the job before reaching a last-minute tentative deal with the province.

Mike Hamilton, President of the Eastern Ontario English Catholic Teachers’ Association (OECTA), was on the picket line in Kemptville. He says the OECTA is showing solidarity with its OSSTF brothers and sisters. Hamilton noted teachers are all in this together and have to be resolute in their approach to Stephen Lecce, Ontario Education Minister, and Premier Doug Ford.

He explained the OECTA has filed a no-board report because even with a mediator, there’s been no movement forward. Hamilton says the union will be in a legal strike position after Christmas. The government hasn’t made any real concessions, according to Hamilton, and continues to fabricate that its reducing the number of required online courses from four to two and reducing class sizes from 28 to 25. He noted these are increases, from zero online courses and current class sizes of 22.

The OECTA represents both elementary and secondary catholic school teachers.

Hamilton explained he’s hearing from his members that the effects of cuts are being felt now, particularly for vulnerable kids and those with special needs.