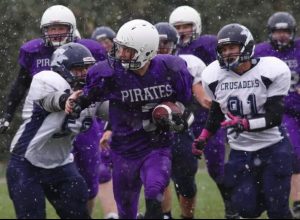 A Brockville High School student has the University of Toronto paying part of their education.

Cade Wykes, a graduate of Thousand Islands Secondary School, has been awarded $6,000 in entrance scholarships by the University of Toronto. Wykes graduated from Thousand Island Secondary School last month with a 94 per cent average. At commencement he won the Principal’s Award for Student Leadership and the 3M Canada Award, which is given to a student going on to study math, science or engineering.

The 18-year-old was also named MVP of Thousand Islands Secondary School football team where he played wide receiver. Wykes acted as anchor on the school’s gold medal winning 4 by 400 men’s open relay team at the 2017 OFSAA Track and Field Championships and took bronze in the men’s senior 400 meter race.

Thousand Islands Secondary School Principal Terry Gardiner says the school is very proud of Cade and he is a tremendous athlete that is also one of their best students. Wyke’s entrance scholarship with the University of Toronto is split, with $4,500 coming from a football scholarship and the other $1,500 is from an academic entrance scholarship to study chemical engineering.