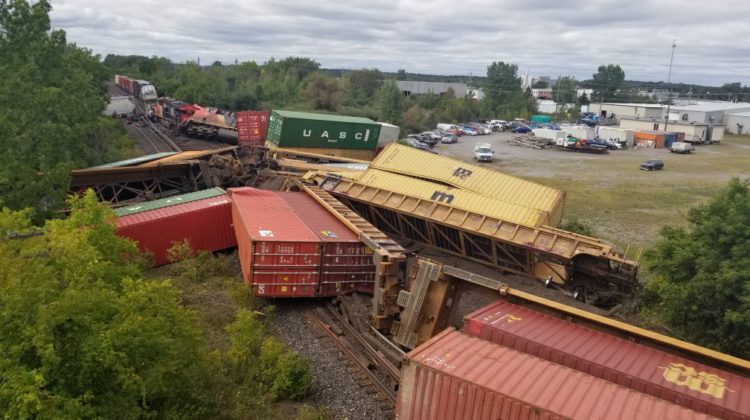 In a council meeting on Tuesday, Mayor Brett Todd spoke about the train derailment that happened last Thursday.

“I’ve just gotta thank everyone again for that fast response with the train derailment last week,” Todd said. “That was a horrific accident that could have been much, much worse.”

Mayor Todd thanked the Northern Cables employees at the scene, the Fire Departments of Prescott, Augusta and Edwardsburgh-Cardinal, and others for their help on the day of the accident, “Some of it we lucked out on, some of it we just had some great people that were in place at the time. I’m referring mainly to our fire department, the incredible job they did to take charge of that scene, to get the injured party out of the train.”

“I’ve got to have a special shout-out for Northern Cables,” Todd added. “Obviously, this happened right in, basically, the backyard of Northern Cables, and their staff were on scene immediately, helped with the extrication of the injured party, along with fire, and just did a tremendous job.”

“I also, of course, want to thank Augusta and Edwardsburgh-Cardinal Fire, they did step in to take our calls, where our Fire Department was, of course, already occupied at the scene of the accident.”

Mayor Todd also says the town was extremely lucky the accident wasn’t worse. “We dodged a whole bunch of bullets. It was like a ‘Matrix’ thing, the number of bullets we dodged on that: the gas line, the overpass, the fact that there was no loss of life. We really lucked out on it.”

The train derailment happened on September 2nd, at 10:00 in the morning. Train lines are operating again as of September 3rd.