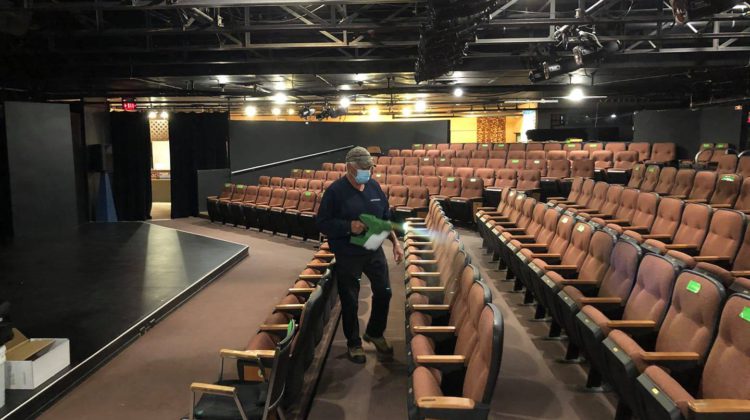 A new disinfectant device is being used to help the Upper Canada Playhouse stay fully sanitized for when the theatre season begins.

The theatre company has been hard at work during the shutdown, ensuring it’s following all public health protocols in the event that it will be able to hit the stage at some point this year.

“We want to make sure that we not only continue to offer our entertaining product but we want to offer it really safely for not only our staff, but our audience, and our entire production team, including the actors that are rehearsing,” Bowes said.

Bowes says he was inspired by a theatre company in New England who’d been using the device for their own sanitization process.

He says after hearing of how the device worked and what it does, they purchased two of them, with each costing around $1300.

“And not only does it disinfect things really well, but it also disinfects light switches, countertops, washrooms, all of that,” Bowes said. “Which means you can do it so everyone has confidence that things are really being disinfected well.”

Since acquiring these devices, Bowes says he’s spoken to other theatre companies about its effectiveness, and many of them may be following suit.

He adds that the disinfecting method is just one of many things they are doing to prepare for their season.

“We’re changing all of our taps in all our washrooms all over the theatre to touchless taps, and also touchless paper-towel dispensers,” Bowes said. “We’re going to get special filters for air filtration, and then of course we bring in concerts as well so we’re going to have plexi-glass screens between musicians. We’re also going to have two separate entrances so we don’t get long lineups.”

Bowes says if all goes well, he’s hopeful that their season can begin sometime in the fall.