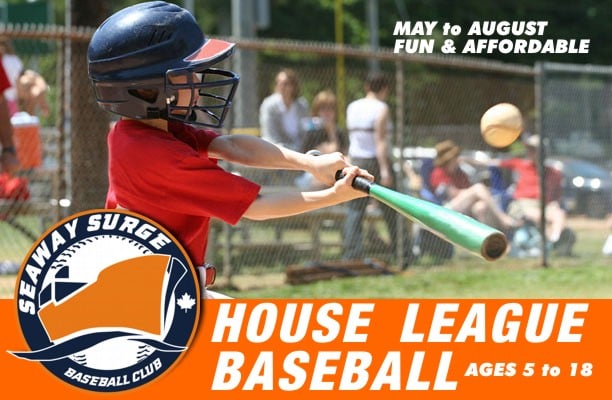 It looks like minor baseball could have a home in the United Counties this summer, pending the pandemic.

Following their commitment to run local house league baseball in 2021, the Seaway Surge Baseball Club has announced a tentative start date for the season on May 17.

Director of Communications Chris Warren says they’ve been overwhelmed by families interested in signing up, and the club is optimistic that a season will take place.

“We’ve had over 200 kids register to date in the house league program, so we’re still going strong,” Warren said. “Better news for everyone else is that we still have space available. If your son or daughter is interested in signing up, registration is still ongoing, you just need to head to our website.”

The season will run 11 weeks, and include 12 games, as well as practices and playoffs.

With baseball being a game of various close encounters, and the concern of physical distancing, Warren says he’s confident in the measures the club has in place to keep players safe.

“Last year we limited use of dugouts and had kids sitting behind them, spaced apart in their own chairs that they brought,” Warren said. “We’ve had an umpire standing behind the pitcher instead of behind the catcher and batter. So, there’s little things here and there that can be adjusted to keep everybody safe but at the same time, keep the game fun.”

With sufficient registration numbers, house league games will be played in Kemptville, Winchester/Chesterville, Finch, and Morrisburg.

Warren adds they are fully prepared to refund families if they run into any issues.

“We are a hundred percent committed to refunds should the season not play out either as planned or no season at all,” Warren said. “So, the risk is not there at all to register. We’re either going to have a great season, or if it’s limited in any capacity, there will be refunds granted as such to reflect lack of play.”

The club is still looking for volunteers to help with coaching.

Anyone looking for more information can check out the Seaway Surge website.