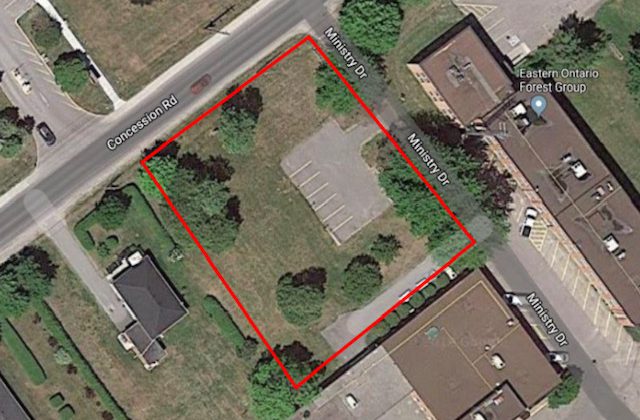 Habitat for Humanity is planning to build 18 affordable housing units on a 0.6 acre parcel of land on the Kemptville Campus. (Supplied by the Municipality of North Grenville)

Plans for the Habitat for Humanity Thousand Islands build at the Kemptville Campus are moving forward.

Two public meetings were held last night, to consider amendments to the Official Plan and zoning for the half acre parcel of land on Concession Road.

Committee of the Whole recommended the Official Plan amendment to council, with a final vote set for December 17. The decision will then be passed to the United Counties of Leeds and Grenville, which is the approval body for Official Plan changes.

The zoning amendment meeting was adjourned until habitat brings back conceptual drawings sometime in January.

Phil Gerrard, Director of Planning and Development, says Habitat aims to construct as many units as possible. He noted the current plan is a three-storey, 18-unit apartment style condominium building.

Gerrard explained it will be up to the engineers and architects to determine what’s feasible for the lot. He says the details have yet to be sorted out.

Habitat Vice Chair Martin Van Andel says it’s possible that the organization may have to settle for fewer units given the size of the property, setback requirements and parking.

If the build goes ahead, it would be the third Habitat for Humanity project in North Grenville.